Friday evening I was in my dear friend's wedding. I have known Britni since I was two and she was four. We have been in homeschool events and co-ops together though the years. We've been to each other's birthday parties and game parties.
Britni met her husband, Zack, when they graduated with the same homeschool group. In fact, they were the only ones to graduate that year. I remarked to them later, after they were engaged, that their graduating class will have class reunions almost every day.
On Friday, we were supposed to help Britni and Zack set up the reception hall for the wedding that was scheduled for the next day. But Hurricane Irene had different plans and the wedding was moved up to Friday evening...giving the wedding party less than two hours to get to the church. The bride was heard singing an adapted version of the song in My Fair Lady, ♫I'm getting married in two hours!♫
After everyone running around like crazy to get everything ready in time, the wedding turned out to be beautiful and the reception was a fun, relaxing time.
The bride's bouquet. 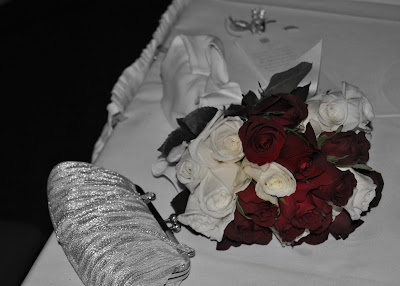 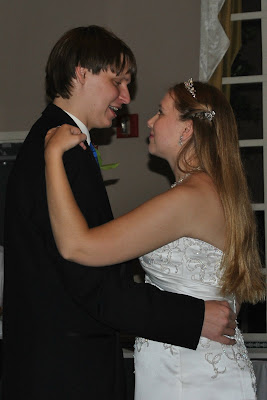 Cutting the beautiful wedding cake made by the mother of the bride. 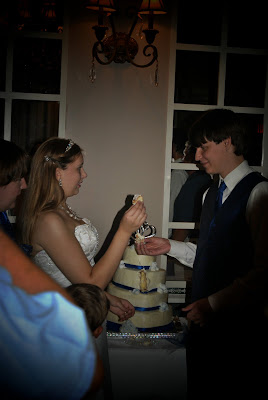 The three of us have been friends since I can remember. ♥♥♥

The bridemaid shoes and flowers. 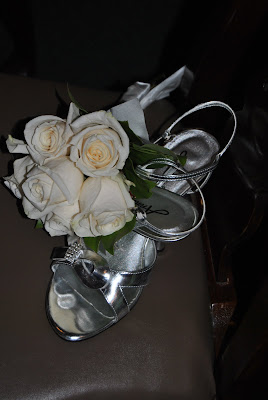 Another look at the flowers.

CONGRATULATIONS
BRITNI AND ZACK!!!
Written by Kati at 10:37 AM

It was a lovely wedding! And the reception was fun and relaxing (as well as beautiful and delicious)!

What a great blog post. That camera takes amazing pictures. And the mother of the bride had help with the cake from a very special bridesmaid. Thanks Kati!

Kati, I'm so delighted to see pictures taken with your new camera. They are so beautiful. You are in for many, many special moments as you hunt for photo opportunities. You'll feel as if you have whole new eyes.

I can't imagine having to change the timing of a wedding so quickly, with only two hours to prepare. It looks as if everything came off beautifully and with much rejoicing. That says a lot about the happy couple, that the focus was on their love.

What a beautiful, romantic tale! We can plan and prepare, yet THEIR forever story will be more romantic than any of the storybook weddings we can dream up. Everyone looks beautiful... and HAPPY!