As I was thumbing through the Everyday Food magazine this month a recipe caught my eye. It was for brownies and it had an odd secret ingredient. It's been said that the ingredient couldn't be detected and that it was better for you because it decreased the butter and cut the calories.


In our family there are several members who are super-sensitive to smell and taste and texture when regarding food. So I knew that if I made this recipe that I would be sure to get true results as to the disguise factor of the secret ingredient with Bekah and Owen around. 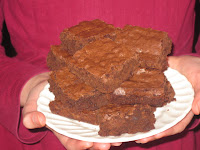 Sunday was the day to try it since Kristin was making a cake so there would be other desert choices. Bekah knew the secret ingredient so she was on the lookout but Owen wasn't told so that he would give an honest opinion. And since it isn't uncommon for me to make something sweet to have on hand they wouldn't be suspecting at all. Desert time came and subtly I made sure that all the kids try a little piece of brownie.

When everyone was done their brownie, I asked those who had a brownie to raise their hand if they liked it. Everyone who had one raised their hand. Then I told them that the brownies had a secret ingredient...BLACK BEANS! Jaws dropped and eyes bugged out.

Brian asked Owen if he would be able to eat one now that he knew it had black beans in it. His answer: yes. Success!


Chocolate Brownies
***This recipe was printed in the January edition of Everyday Food magazine under the name Triple Chocolate Brownies and can also be found here on the Martha Stewart website. The recipe below has the adaptions I made.

I was telling Mom today that I checked my black bean brownie recipe and it call for 2 CUPS of black beans. I'm a little skeptical if that one would pass Owen's test. I think I need to try it now just to see, but we might be going back to your recipe. :-)

I would never have guessed the secret ingredient. My sister makes brownies with applesauce but black beans is a lot more adventurous. Glad they turned out so well!

I'm glad yours turned out well! My sister in law Angela told me you can always substitute beans for butter in cookies. So black beans replace butter in chocolate recipes and white or pinto or whatever in regular cookie recipes. And in my experience they've always turned out well (even Ryan would agree)!!

Kati ... I, too, would never, ever have guessed that black beans were the secret ingredient! To tell you the truth, I'm not sure I have ever even SEEN a black bean. Obviously, my kitchen skills leave a lot to be desired. So delighted your love for healthy baking has begun so young.

The secret is out...but you really can not tell that black beans are in there. I hope to get a chance to sample Kristin's recipe with even more beans. (It's a tough job, tasting all these treats...but it's in the name of science, isn't it? Kitchen science anyway?)

And I love the line "even Ryan would agree." Reminds me of Mikey of the Life cereal commercials. :-D