In Which Kati Loses Her Wisdom and Tells of Her Adventures

For about a year before my surgery I had been having trouble with one of my wisdom teeth. It would flare up every now and then but finally my dentist (who is also my cousin, Kevin) suggested that I have them taken out.

Here are a few things I found helpful during my surgery and after:

Ice cream is your friend. It helps to have something cold on your gums and it's one of the only times in your life that you can eat it every day for a week and not feel guilty. ;)

Be sure to have some chapstick. My lips were quite chapped for a few days after the surgery.

Clove oil might be nasty tasting in your mouth and it makes your mouth tingly but it does numb the area. I used this starting on day 5. At first I didn't see much difference in pain but when your pain meds are starting to wear off it really helped. You can find clove oil in most pharmacies behind the counter. It can also help if you get dry socket.

It was quite helpful that my sister Kristin wrote a blog post about her wisdom teeth surgery recovery back in January. I referred to that post a lot to see how I was "supposed to feel." :)


This is how I really felt:

Day 1- My mouth was numb until early afternoon. Bleeding was an issue most of the day. Tried biting down on a tea bag (which is supposed to help stop bleeding) as a change from the gauze but liked the feel of the gauze better. Iced 20 minutes on one cheek, 20 minutes on the other, and 20 minutes off. I wasn't allowed to have caffeine for the first 24 hours which was hard!

I was a slight bit stiff and very sore but I was able to use just ibuprofen and Tylenol for pain instead of using the narcotic prescription. Woke up in the middle of the night for ibuprofen and an ice pack. 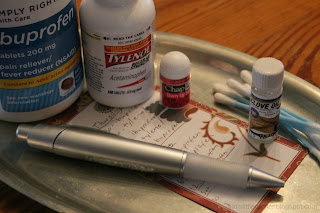 Day 2-  Very sore. I could hardly open my mouth from stiffness. The swelling was worse then the day before but this day was the peak. Kept ice on my cheeks all day long, 20, 20, 20. Used a product called Sockit! a couple of times. Sockit! is supposed to help with dry socket  and is a wound dressing. My lips were chapped and I started using chapstick. Soft foods like oatmeal, soup, applesauce, and jello were on my diet. Woke up in the middle of the night for meds and ice again.

Day 3- The pain was very bad when I got up and I was very stiff. By mid-morning the pain was back down to how it was the day before. I think that the angle at which my pillows were  propped up put pressure on my gums. Used Sockit! many times during the day and started washing water over the incisions using a syringe. A friend from church brought me a present of a frozen coffee from Dunkin' Donuts which felt very good on my sore mouth (thanks Alissa!). I noticed that the sutures were starting to disappear. The lower left incision started bleeding again but with gauze and a tea bag it soon stopped. Slept through the night.

Day 4- Still very sore but a little bit less stiff. There was still a bit of swelling but if you didn't know it you couldn't tell. My lips were a little less chapped then before. You could see a slight bruise on my left cheek. The bottom left is the one that hurt the most but that is the only tooth that broke as they tried to pull it out so that was to be expected. Used the Sockit! all day.

Day 5- Had a dry socket scare when I sneezed but it didn't turn into anything.

Day 8- The last of the sutures came out. The pain was still there but a slight bit less. I started chewing a little but it still hurt the gums.

Day 14- Went back to the oral surgeon for my follow-up and was released from his care.

Have You had your wisdom teeth out?
How did you feel?
Written by Kati at 11:57 PM

I love your Pooh-ish title, Kati. And I'm so glad you are now on "this" side of your adventure, rather than at the starting line. Thanks so much for sharing how it really was for you as you recovered. I know your words will be helpful to many people who are losing their wisdom in the future.

Now that this experience is behind you, maybe you can put your boots on and go in search of a more fun-ish adventure.

Glad you made it through this adventure, Kati! I have half my wisdom... Had my top wisdom teeth removed around 35, along with the molars next to them which they had damaged. The bottom ones are still there, almost completely sideways, but not currently causing any trouble. So until they do, there they remain!
:-D

Oh you poor dear!
I had to have my wisdoms come out because the dentist said even though it looked like I would have room in my mouth, the teeth weren't positioned right so they were going to make all of my other teeth crooked. :/
When they took them out my mouth, I was all numbed up too for a day. I didn't have any pain or bleeding, though mom did keep the gauze in my mouth until I went to bed just in case. :)
I also put ice on my cheeks even though I didn't have pain because it felt good! LOL
All I was aloud to eat was: soup, icecream, mashed potatoes, and pudding! And like you said with the icecream- it's one of the only times in your life that you can eat it every day for a week and not feel guilty! haha
I did get sick of eating that stuff though and I was glad when I could eat a pb&j.


Oh I must warn you, you might get some pain where the teeth were taken out. It's because the jaw bone is coming back together. That is what happened to me. But listen, if you keep having the pain past two days, I would go in to make sure food didn't get stuck and is causing the pain. :)

Hope the pain goes away. Have a good day Kati!