Have you ever needed a good book? I have often! I just want to curl up somewhere and lose myself in a book. In this picture I did just that! 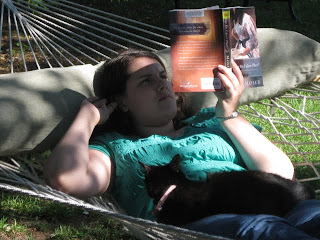 Have you ever wondered what Nannerl Mozart thought about her brother Wolfgang's fame? Or what made Jane Austen what she was? Or What Martha Washington thought about the Revolutionary War and what she did while her husband was away commanding the army? And what made Elizabeth Barrett Browning a recluse and how she ended up marrying? I wondered about these things until I read four books by Nancy Moser about these characters. She brought these people and their surroundings to life. Each woman tells her own story and her thought and feelings.

In Mozart's Sister, the family travels across Europe so that little Wolfgang, the prodigy, can play for royalty and nobility for money. As the children grow up Nannerl realizes that she will never be as great as her little brother.
Just Jane was the first Nancy Moser book I ever read. Jane's sister Cassandra burned her sister diaries after her death and a period of Jane's life is a mystery. Moser created the book on some facts that are known about the author of Pride and Prejudice and used her imagination to fill in the blanks. Then in the back of the book you can learn what is fact and what is fiction.

Washington's Lady starts when Martha's first husband Daniel Custis died, leaving her with two children. Then handsome George Washington, hero from the French and Indian war, steps into the picture. Of course we all know what happened after that!


How Do I Love Thee? is the story of Elizabeth Barrett Browning. The poet is a recluse and since her tyrannical father has forbid any of the Barrett children to marry she is happy to just write poetry and see her family. Then Robert Browning, a fellow poet, meets Elizabeth. They fall in love but what about her father?

I have really enjoyed these books. I hope you will too.
Written by Kati at 2:14 PM

I'm waiting on Washington's Lady from Paperback Swap right now. It was mailed WEEKS ago, but it is coming from Alaska so I'm still waiting!