Knitting is such a relaxing project. I like that you can do it almost mindlessly while watching TV. I wanted to share some of my recent knitting projects with you.

I found this orange/yellow/brown/rust/cream colored yarn in my yarn stash and since I had plenty of it, I started experimenting. I came up with the idea to make hats for the little boys. There were a few moments at the end when I thought that I wouldn't have enough to make all three hats but I did with just a few inches of yarn left! That was last winter when there was a sick person in the house and since there were movies playing most of the day, it was easy to sit down and knit the hats in just a couple of days. I decided to keep them for Christmas (I think ahead when planning gifts.) Fast forward to the fall and I found some lovely cream colored yarn at Hobby Lobby for the girls' that went with the cream in the boys' hats. 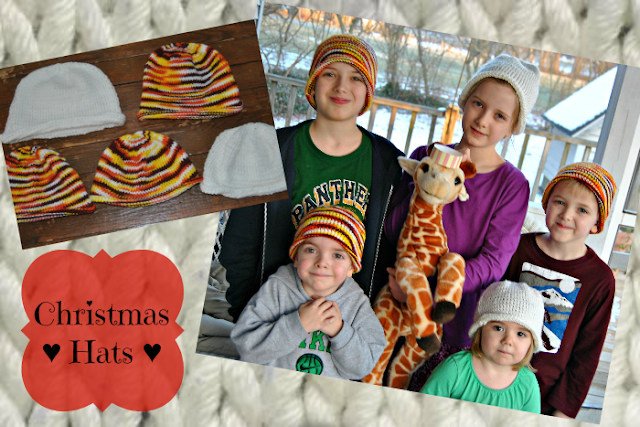 When I was purchasing the cream colored yarn, I noticed that Bekah was admiring a yarn that had a silver glitter string running through it. It went with her coat, so I asked her if she would like to make her a hat with it. She did and I whipped up sparkly hat for her after I was finished with the other hats. I really liked it, so I was inspired to make her a scarf for her Christmas gift. I didn't want her to know about it so I had to knit in the cracks...late at night, during her piano lesson, behind the closed door while she was doing school. It seemed to take forever! Try knitting 5 feet of scarf in secret. But I got in done in plenty of time. It looks so cute with her coat and hat. She has gotten several compliments. My grandmother (who is just as frou-frou as Bekah is) asked me to make her one just like it which I finished last night. This one went much faster than the other one did. 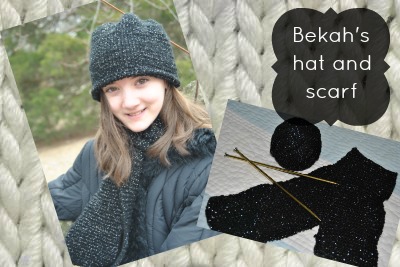 Beautiful gifts, Kati. I love Bekah's hat and scarf set. Do you crochet as well as knit? xo

Is this the scarf that Finn also admired? ;)

I am a very long way from knitting mindlessly. (Unless you consider that I almost lose my mind when I am trying to knit?)

I love these projects! I know Bekah loves her glittery scarf and hat!

Kati- beautiful job. I can only knit 1 thing- a slipper pattern that my grandmother used to make. I just started a pair for Abi!