On the Saturday after Thanksgiving we always put up our Christmas tree. The Christmas of 2004, we went over to my uncle's (who sold Christmas trees back then) and picked out our tree as usual. That was the year that Sarah, who was then Ryan's fiancee, came with us. As we always did, we took a picture of whoever was there helping chose the perfect tree.
That evening, after our traditional meal of subs, we trimmed our tree while listening to Bing Crosby's White Christmas album and eating shortbread cookies. 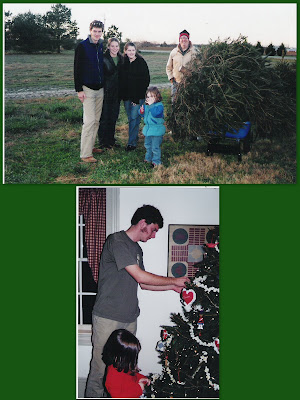 Everything looked good until...the tree started loosing its needles. It kept loosing more and more needles and before long it was a sad sight. It got so bad that the week of Christmas, Dad went out shopping for an artificial tree to replace the dead, trimmed tree. He came home with one and we started the job of untrimming the tree, taking the dead, needle-dropping tree out of the house while trying not to drop too many needles before making it to the door. After it was out the door, there were whole piles of needles in the corner. 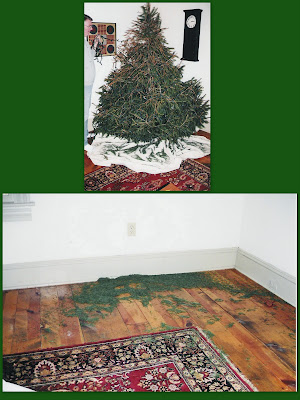 After a thorough vacuum (even after that we still found needles for a long while) we then had the task of re-trimming the new tree. 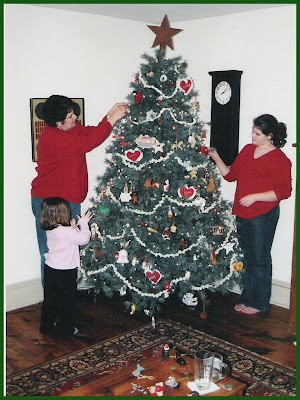 On Christmas Eve, when Gammy and Gampy came over, Gammy snapped our picture in front of the new, re-trimmed tree for us. 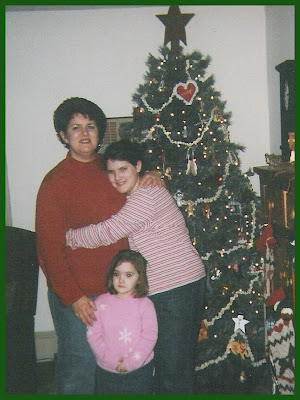 Linking up to Kristin's Gather Round Your Tree linky party...

Kati, I LOVE seeing these older pictures. Isn't it amazing how pictures can bring back so many memories? These are precious. And I loved reading your story about the tree diaster, which turned out okay in the end. Hope you are having a beautiful, love-filled Christmas Eve.

Wow! You and Bekah have changed so much, but I don't think Mom looks a minute older! Yay, Mom. :-)