Once upon a time  there was a tiny baby who was given a finger puppet owl when her aunt came back from a long summer trip. The next week the tiny baby's owl was named Owlaine which was close to her own name, Alaine. Ever since then, whenever they saw an owl toy or picture or outfit they would think of the tiny baby who was steadily growing bigger. 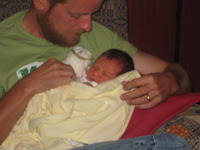 Then in the spring the baby's parents bought a new house and there were enough bedrooms for the baby and her big sister to have their own girl-y room. The bedding that was chosen for the room was decorated with hedgehogs and trees and of course, owls.
Since their new decor had owls, the aunt made embroidered pillowcases with owls on them and made them each a stuffed owl for their birthdays. 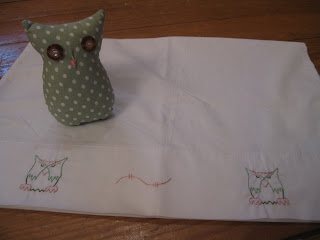 The baby, now turned toddler, and her older sister and best friend were happy with their new pillowcases and owls. Then one day, their mama found the two sister/friends playing with their owls in their room. And smart mama that she is, snapped their picture. 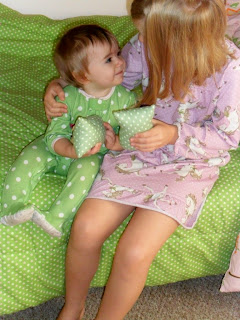 And the aunt? She thinks she is the luckiest aunt in the whole world.
The End
Written by Kati at 12:42 PM

Oh, what a sweet, sweet story, indeed! I have been seeing lots and lots of owls on my recent outings to antique stores. Now I will always think of a special little niece and her oh-so-loving aunt! Those owl pillows are the cutest things ever!